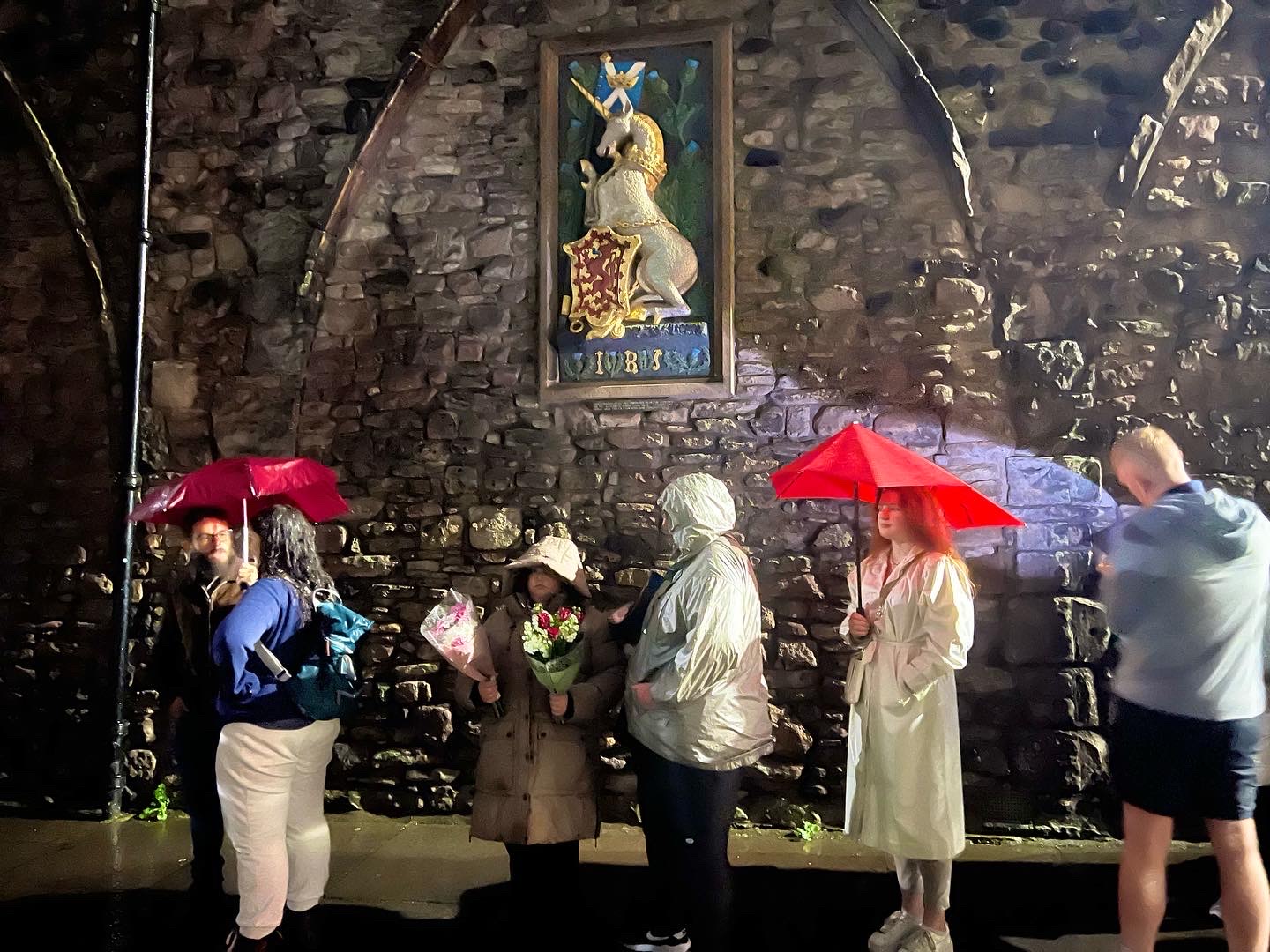 Mourners gather outside the Palace of Holyroodhouse in Edinburgh, Scotland to pay respects to the late Queen Elizabeth ll on Sept. 8 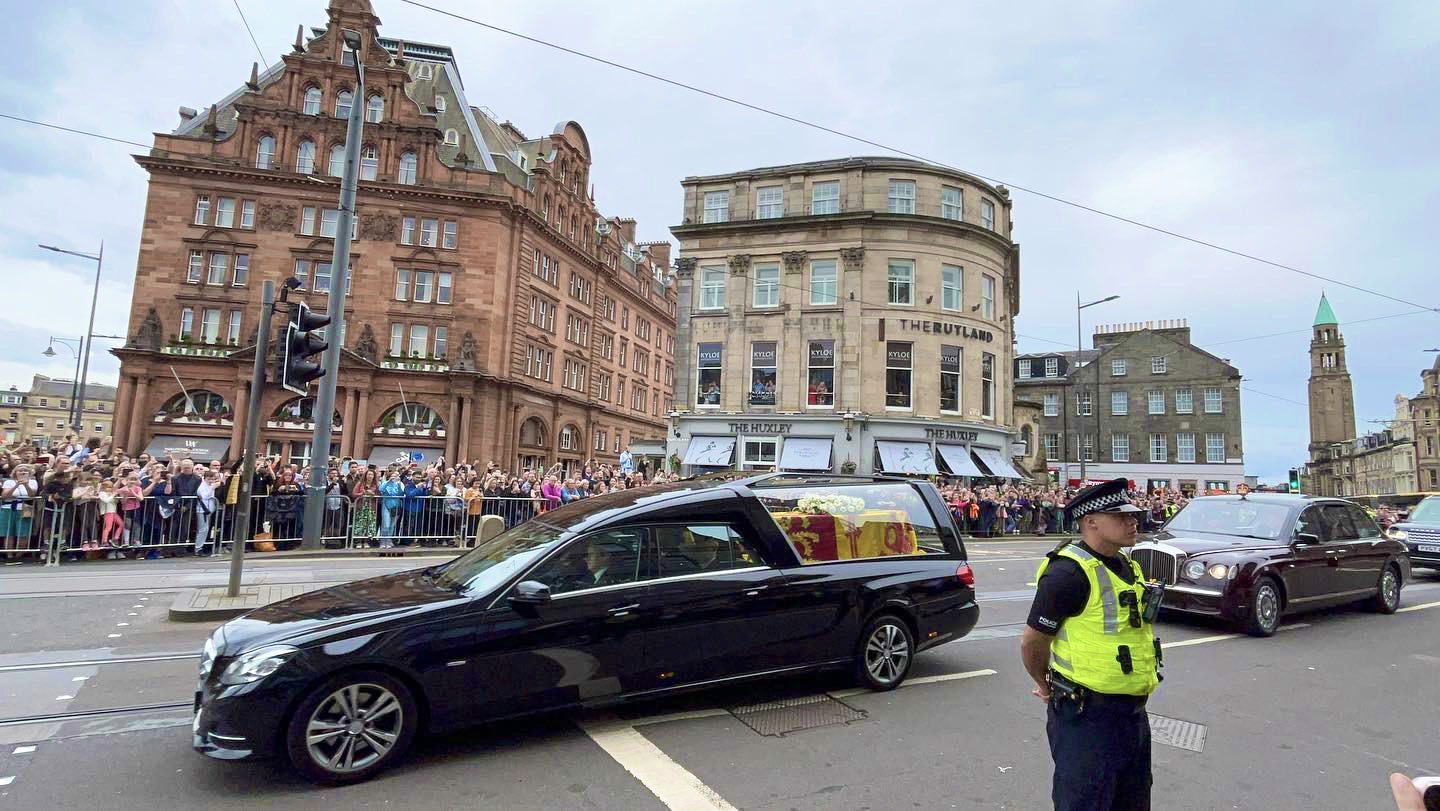 Hundreds gather along the roads of Edinburgh, Scotland to observe the moving of the Queens body to The Palace of Holyroodhouse on Sept. 11

Edinburgh, and the entire United Kingdom, has entered an official ten-day mourning period following the tragic death of Her Majesty Queen Elizabeth II.

Buckingham Palace stated around 6:30 p.m on Thursday, Sept. 8, that the Queen passed peacefully at Balmoral, a beloved Royal home in the Scottish Highlands. Sept. 9 marked the beginning of Operation Unicorn which outlines the precise plans to move the Queen’s body from the Highlands to London which included a procession through the Old Town of Edinburgh.

“It is such a sombering experience being here in this moment of time,” said Sophia Tremblay, a University of Massachusetts junior studying in Edinburgh. “We are truly living through history right now.”

It is hard to understand what the Queen’s death means for the future of Scotland, the United Kingdom, and frankly the world.  Scotland has not always had loving relations with England.  After years of violent fighting, Scotland was conquered by England and was forced to join the Kingdom of Great Britain in 1707.

Citizen-led campaigns have fought for Scottish independence for years.  In 2014, 45% of Scots voted to leave the UK.  The aftermath of Brexit and the recent death of Queen Elizabeth leave the future of Scotland unknown.

“I voted to leave in 2014 and after recent events, I think it’s an even better time than ever to leave,” said Finley Brooks, an Edinburgh citizen.

“If you want the entire world to laugh at you, just look at Brexit,” said James Flucker, a Scottish  citizen. “It is sometimes so embarrassing to be a Brit in these times.  Maybe this recent event may push people over the edge and finally say ‘I am over all the bulls**t.’”

While the city is in an official Royal mourning period, it is evident the Scots do not mourn the recent passing as deeply as their English neighbors to the south. Scottish pubs, bars, schools and nearly all businesses are still open as normal and celebrations such as the historic Highland Games are still operating.  Despite a few road closures to accommodate Operation Unicorn’s journey into Edinburgh, it is business as usual.

“As an American, I just expected the entire city and country for that matter to shut down in the wake of her death,” Tremblay said.  “It has not really been the case in Edinburgh which shocks me.”

Some Scots in Edinburgh even view Queen Elizabeth’s death as nothing more than an inconvenience.

While waiting for a delayed bus, a woman shouted from across the road “the bus isn’t coming because the f****ng Queen dropped dead, thanks a lot.”

“I am merely here out of respect for a woman that died, not to support the imperialization of my country,” said Brooks while in line to lay flowers at the Palace of Holyroodhouse.

It is difficult to understand what the future looks like with the newly crowned King Charles on the throne, however, one thing is certain; Scotland and the entire United Kingdom have moved into a new period in their history.