“We’ve been waiting for you to get here,” Ashley Bauman, Mercury Public Affairs Director of the Gasparilla Festival of the Arts, told Jessie Goldstein the second she arrived at the Showcase. Why? Am I in trouble? Jessie thought to herself.

“Ana Cruz, the First Lady of Tampa, wants to buy your piece ‘Sugar Rush.’ Please tell me you haven’t sold it yet, she really wants it,” said Bauman.

Jessie was flustered, completely caught off guard. She couldn’t believe it was real life. 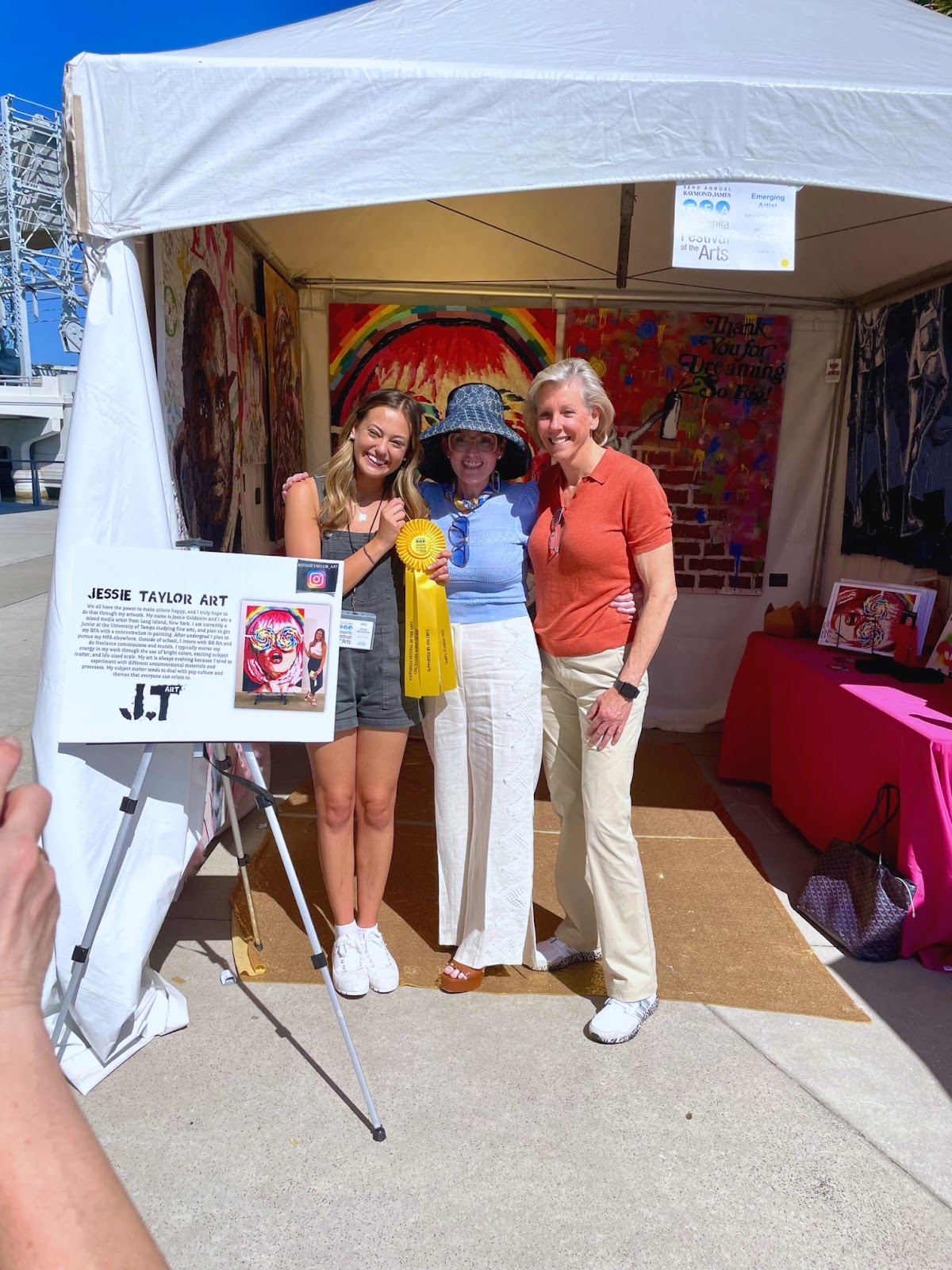 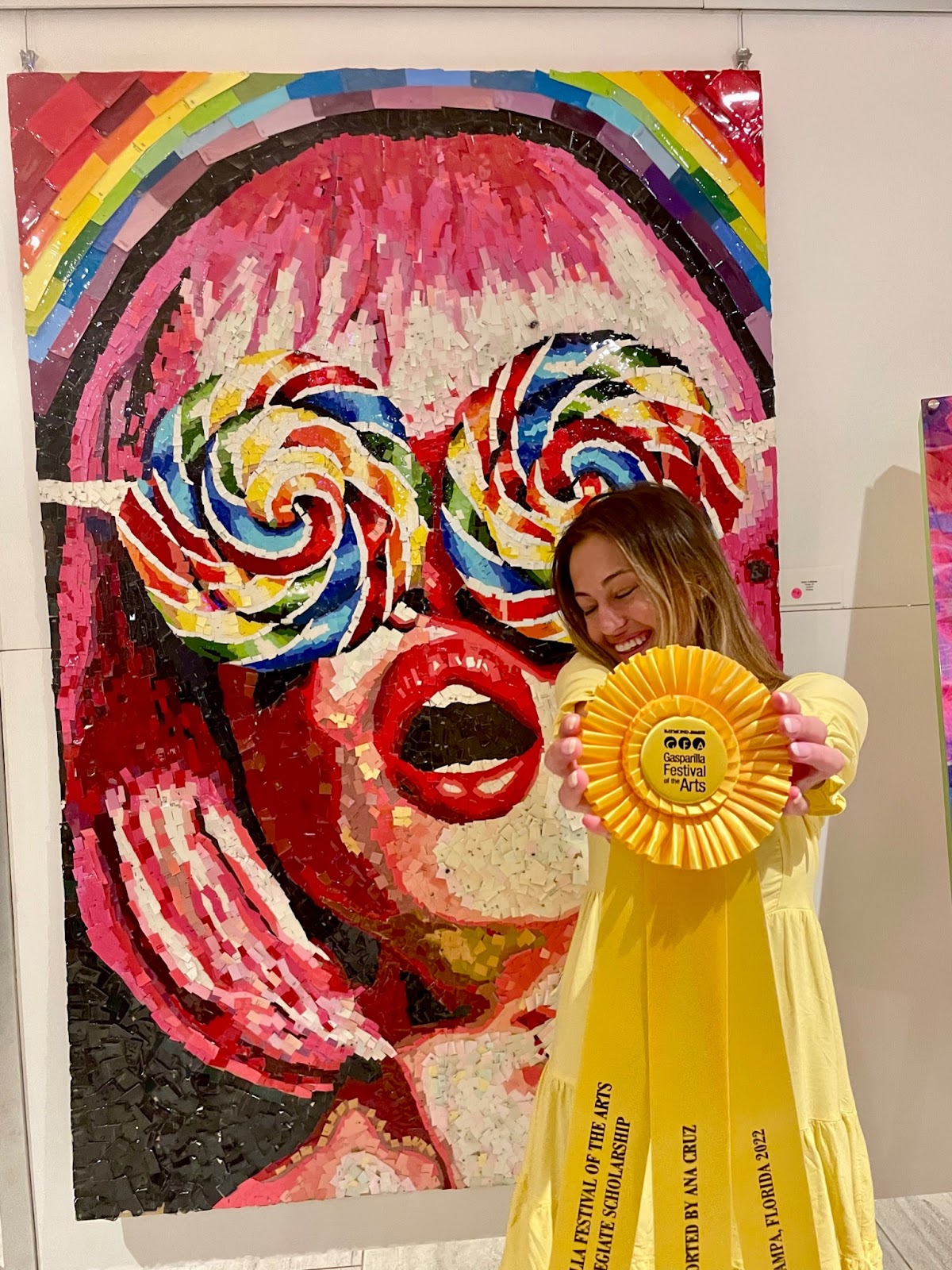 Minutes later it was announced that “Sugar Rush” had also won her the Gasparilla Festival of the Arts Collegiate Scholarship award.

Many artists arrive into the world, filled with a passion to create. Others require training and education to obtain the skills it takes to be an artist. Jessie Goldstein, a junior fine arts major at The University of Tampa, was born an artist.

From Long Island, New York, Jessie started drawing before she learned how to write.

As far back as elementary school, Jessie constantly got in trouble for doodling on her paper instead of paying attention in class.

“I would draw on literally everything,” said Jessie. “My teachers always yelled at me and told me to ‘stop drawing and take notes.’”

Jessie began taking honors art classes in middle school and high school, but she only saw it as a hobby. It wasn’t until college when she realized art was something she wanted to make a career out of.

“I originally came to UT as an elementary education major,” said Jessie. “After my first day of classes freshman year, I wanted to switch out of an honors sociology class so I asked my advisor if there were any painting classes I could switch into.”

Luckily for Jessie, there was a painting class still available, which changed everything for her.

“Having all of the resources and instruction that UT gave, I had never had that before,” said Jessie. “I got my heart set on it.”

She eventually changed her major to fine arts and started pursuing art as a career, rather than a hobby.

Although, it wasn’t an easy adjustment for her. She was doubted by many and discouraged from pursuing a degree in art.

“I love my family, and I know they only wanted what’s best for me,” said Jessie. “But when I first told them ‘yeah, I’m going to be an artist,’ they said, ‘no you’re not.’”

Jessie said she was faced with questions like; how will you make money, how will you be able to support your future family, where are you going to get insurance?

“Eventually I just was like, eff it. I’m going for it anyways,” said Jessie. She hasn’t looked back since.

Her family has also warmed up to the idea of her becoming an artist, especially since the creation of her painting “Sugar Rush,” which now sits in the First Lady of Tampa’s home.

“I actually found out when we were dropping off my painting to Ana Cruz and the Mayor’s house that my dad told them that specific painting made him and my mom change their minds about letting me be an art major,” said Jessie. “My dad said when I made that painting, they knew I’d be successful.”

Her parents said they couldn’t be more proud of her for her accomplishments at this year’s Gasparilla Festival of the Arts.

“We were beyond proud and happy for Jessie,” said Beth Goldstein, Jessie’s mother. “The whole Gasparilla experience was fantastic from beginning to end.”

“And to top it off, to have Jessie’s favorite piece purchased by First Lady Ana Cruz and Mayor Jane Castor was incredible,” said Charlie Goldstein, Jessie’s father. “‘Sugar Rush’ couldn’t have found a nicer home.”

Even as a full time student, Jessie is successful in painting murals and doing commission work on the side. She was also able to land an internship with artist and UT alumna, Bianca Burrows.

“She is literally an older sister to me,” said Jessie. “She has taught me everything and has shown me that I can make it as an artist. She’s living proof.”

Once Jessie graduates from UT in spring of 2023, she will be pursuing a masters degree in art.

“I want to get all my schooling over with and then I’ll be a full time artist and maybe one day an art professor,” said Jessie.

For now Jessie will continue to pursue her passion of art, something she was born to do.